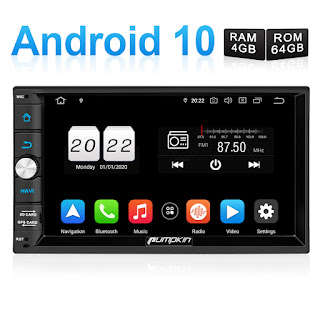 I installed this Android 10 Head Unit 7" Double Din head unit in a 2005 Ford Ranger. The install wasn't bad but I did have to cut out more of my dash. I had previously cut out some for the deck that was in here before. Not a big deal but worth noting. That could be just because my truck is old too. Hahaha.

As for the unit itself, everything is great. It's very responsive. I've seen some reviews of people saying they're responsive but the video suggests otherwise. This one is very snappy with that new p6 CPU.

AM/FM works great. I use Spotify premium and download my music so I always have it. That also works flawlessly so far. I've also downloaded a large area around me in Google maps, though I do usually use my phone as a Hotspot.

Torque connects quickly and works well with my obd2 connection. I do see there is a review talking about this not working. It's possible I just happen to have the right type of OBD2 connector. I know there are some that say they may not work with Android head units.

I also ran all 3 USB connections out under my dash. It does run my charger and my dashcam with no issues.

So far, after about a week I'm VERY happy with my purchase. I was worried as there was only one review in here at the time with no written reviews.

Now for the bad stuff.

My biggest complaint/wish is that the music controls could be kept on the screen always. If I have torque up, I have to switch apps back to Spotify or the radio to change anything. With Google maps and Waze, they do have a Spotify interface which helps a bit.

My other gripe is that you can't seem to adjust the widgets on the home page. It has the clock and radio controls which are nice but I can't move them or even put the Spotify widget on the unit. It's not a huge deal and it just takes a minute to get used to.

Overall, I would absolutely buy this again. I'd recommend this to anyone who is looking for an android deck.